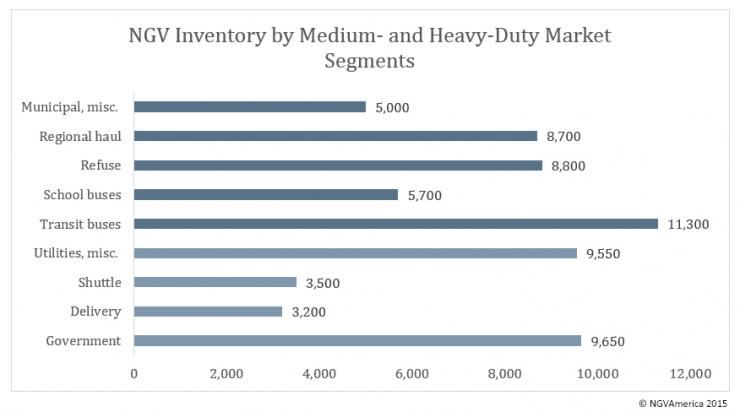 The Obama administration’s proposal Friday to slash medium- and heavy-duty vehicle emissions could transform the niche market of low-carbon haulers into a mainstream fleet. The standards, which target 18-wheelers, school buses and garbage trucks, will drive manufacturers to adopt the hybrid-electric systems, natural gas engines and other fuel-efficient technologies already in use on America’s roads.

“The new requirements are just going to make them more attractive. It’s going to drive the market further,” said Anne Tazewell, the transportation program manager at the North Carolina Clean Energy Technology Center, which promotes alternative fuel use in the state.

Autocar Co., an Indiana manufacturer, says 60 percent of the garbage trucks it makes now run on compressed natural gas (CNG), which is clear and odorless and stored in thick aluminum tanks. The company started making CNG models in 2005, as municipal leaders began searching for ways to cut costs and reduce toxic diesel fumes from slow-moving, idling refuse trucks and school buses. The average garbage truck gets just 2.8 miles per gallon and burns about 10,000 gallons of diesel each year; the typical U.S. driver, by comparison, uses around 400 gallons of gasoline a year.

“Our customers are telling us that big heavy trucks driving in neighborhoods are potentially disruptive, so they’re looking for ways to have a lighter impact,” Adam Burck, Autocar’s head of marketing, said. Autocar’s CNG garbage trucks have 23 percent lower tailpipe emissions compared to its diesel versions, which are equipped with advanced emissions-reduction technologies. The company’s hybrid-electric Autocar E3™ model has 45 percent lower emissions compared to a standard refuse truck, Burck said.

In the last decade, the number of natural gas-fueled garbage and recycling trucks in the U.S. has grown sixfold, with around 8,800 of the vehicles on America’s roads today, the Natural Gas Vehicles for America organization (NGV America) reported. Thousands more buses, trailers, street sweepers and other large vehicles use hybrid-electric engines, nonpetroleum biofuels and other alternative fuels.

Around 163,000 medium- and heavy-duty trucks used alternative fuels in 2011, according to the Energy Information Administration’s most recent estimates.

Bringing technologies like these mainstream is critical for reducing the country’s greenhouse gas emissions, experts say. Large vehicles account for about 20 percent of the emissions and oil use from the entire U.S. transportation sector, yet comprise only 5 percent of the vehicles on America’s roads, the Environmental Protection Agency said.

But so far, cleaner alternatives are only a small slice of the nationwide market for medium- and heavy-duty trucks.

For natural gas alone, only about 6 percent of the nation’s 140,000 refuse trucks use the cleaner-burning fuel, while just over 1 percent of school buses run on natural gas, the NGV America report found. Lower-carbon models can cost tens of thousands of dollars more upfront than conventional trucks, while alternative fuel supplies -- such as CNG stations or battery-charging hubs -- aren’t widely available or convenient for many truck operators.

The recent plunge in U.S. oil prices -- from above $100 a barrel last summer to around $60 a barrel today -- has also reduced customers’ desires to switch to low-emissions models. Natural gas vehicle sales in particular fell by 6.5 percent in 2014 from the previous year in part because of cheaper oil, NGV America said.

The Obama administration’s proposed emissions rules could help stifle the effects of oil price swings and fickle consumer demand on clean-vehicle manufacturers, Tazewell said. “Right now we’re getting mixed signals ... but in the long run, what’s good for our country is to diversify our fuel supplies and reduce emissions,” she said. “Having consistent policy is important for this.”

Under the proposed rules, semitrucks, large pickup trucks and vans, buses and work trucks for the model years 2021 through 2027 must achieve up to 24 percent lower carbon dioxide emissions and fuel consumption compared to equivalent models from 2018, the EPA and the National Highway Traffic Safety Administration said in a joint announcement Friday.

The standards are expected to slash emissions by 1 billion metric tons and cut fuel costs by about $170 billion over the lifetime of the vehicles sold under the program. Friday’s proposal builds on the agencies’ first-ever federal standards for big trucks, announced in 2011, that apply to models built between 2014 and 2018. The Obama administration also requires light-duty passenger cars and trucks to double their fuel economy by 2025.

“Once upon a time, to be pro-environment you had to be anti-big vehicles. This rule will change that,” U.S. Transportation Secretary Anthony Foxx said in a Friday statement.

Burck said Autocar couldn’t comment directly on the EPA’s proposed emissions standards, or whether the limits might offer a boost to clean vehicle companies. “Anything that can lead to a cleaner environment and lower the use of fossil fuels is a positive thing for everybody," he said. “We would be doing that in the absence of regulations.”

The American Trucking Associations, an industry group, offered cautious support for the forthcoming rules. “Fuel is an enormous expense for our industry -- and carbon emissions carry an enormous cost for our planet,” Bill Graves, the organization’s president and CEO, said in a Friday statement. “So the potential for real cost savings and associated benefits of this rule are there.”

But he expressed concern that the pending EPA rules could force truck and engine manufacturers to adopt expensive or unreliable technologies in order to meet the emissions limits. Companies “will need adequate time to develop solutions to meet these new standards,” Graves said.

Chet France, a consultant for the Environmental Defense Fund and former senior EPA official, said the emissions standards should be more aggressive in order to spur innovation in vehicle technologies. France worked on the EPA’s first phase of standards of medium- and heavy-duty trucks, as well as fuel economy limits for light-duty cars.

He said the Obama administration should push trucks to curb emissions to 40 percent, a more stringent target than the 24 percent proposed Friday. “A 40 percent reduction will encourage creative ways to meet the standards,” he said. “Alternative fuels is one of them.”

There’s a lot to choose from – especially when we’re talking custom specs. Tell us what you’re looking for and we’ll put you in touch with an Autocar Representative who is an expert in your field.Simply fill out the form below to get started. We’ll be in touch with you shortly.

Find Me A Truck

There’s a lot to choose from, so consider us your truck matchmaker. Give us some details and we’ll find the perfect one for you. Simply fill out the form below to get started. We’ll be in touch with you shortly.

Tech Docs system allows registered Autocar® users access to browse and view relevant schematics, wiring diagrams, and other information for all truck models that we produce. What kind of facility do you represent?

Access to our Technical Documents is reserved for our authorized sites or current owners of our vehicles. Don't worry - we can still help. Please follow the link to our Autocar Solutions® page and submit a ticket. Our service department will be in touch.

Don’t worry – it happens to the best of us. Fill out this form and we’ll send a temporary password to you.

Please tell us more about the training you are interested in.

We don’t want to seem clingy, but we do want to keep in touch! Complete this form and we’ll get you signed up for all things Autocar. Be the first to know about breaking news, promotions, and the most up-to-date information on our trucks. Pretty soon we’ll be calling you an Autocar expert.

If you were here, we’d take you out to dinner and have a night on the town. You’ll just have to settle for being registered in our prize drawing. Stay tuned to see if you’re this month’s winner.